A recent birding tour in April 2018 (Southern Hemisphere Autumn/Fall) produced 110 species of birds. Although not the most productive time of year for birds, we managed some great sightings. 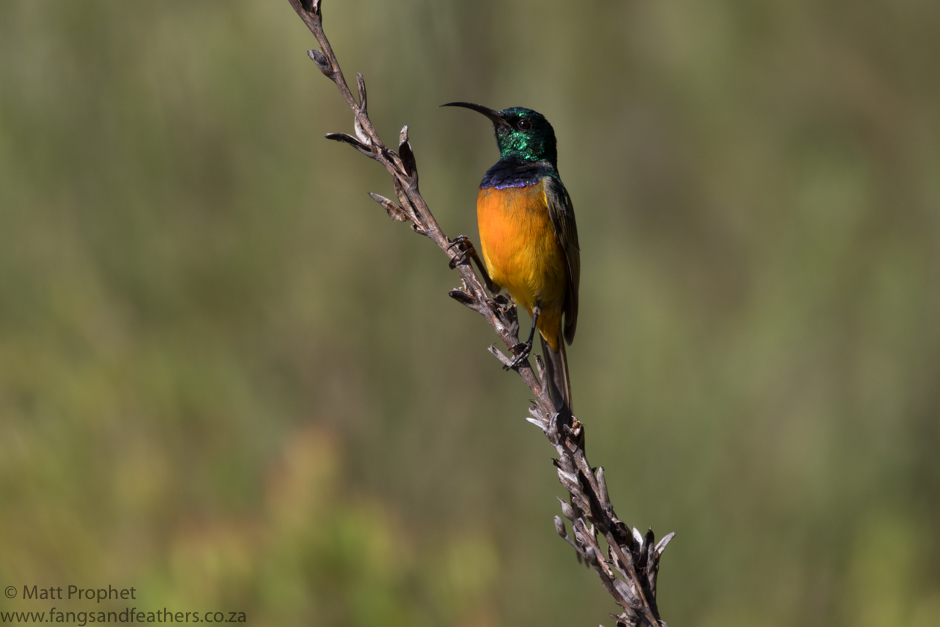 Our typical day involved an 8am start with a 5pm drop-off back at our clients guesthouse where they where staying. The general focus of this particular tour was to see as many birds as possible, while at the same time trying to photograph them too. 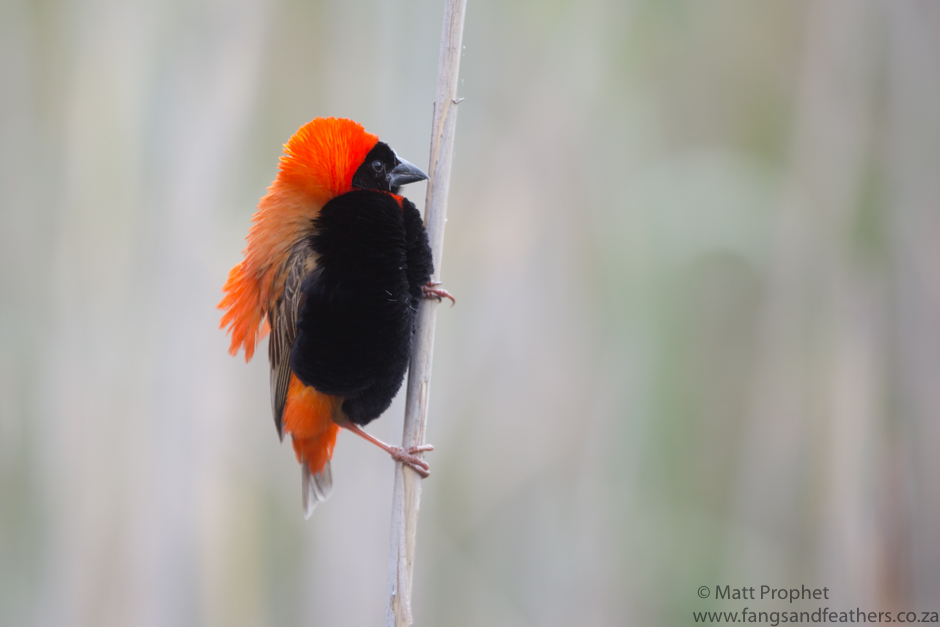 On our first morning we birded at the well-known Kirstenbosch National Botanical Gardens where we walked through a good portion of the 528ha gardens searching for sunbirds, sugarbirds and other fynbos endemics. Stand-out birds for our group included very good views of Orange-breasted, Southern Double-collared and Malachite Sunbirds, as well as Fiscal Flycatcher, Cape Sugarbird, Cape Bulbul, Cape Spurfowl, Cape, Brimstone and Forest Canary, Cape White Eye, Black Saw-wing Swallow and Cape Robin Chat to name some of them. 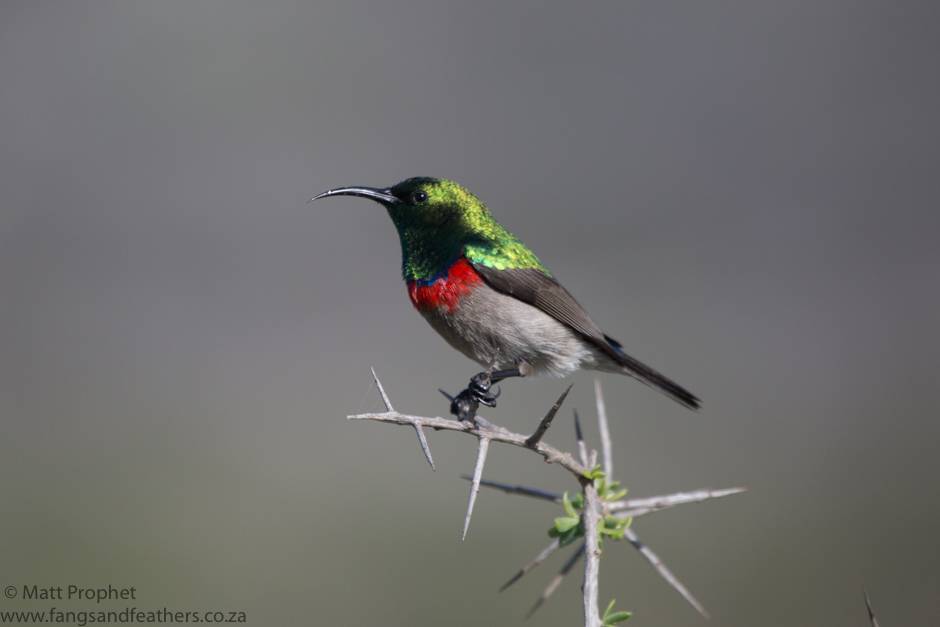 Walking through a patch of montane forest on the edge of the gardens produced an elusive Lemon Dove, not an easy bird to come across in South Africa, but a resident in Kirstenbosch's forest patches. Cape Batis was well seen, as was a male Olive Woodpecker near the popular "Boomslang" tree canopy walk. A Cape (Small) Grey Mongoose was seen hunting between between the culivated flower beds and a sought-after Rufous-chested Sparrowhawk observed soring over the forest. The raptors on this particular day where a bit slow and on a good one, as many as six or seven species may be recorded. 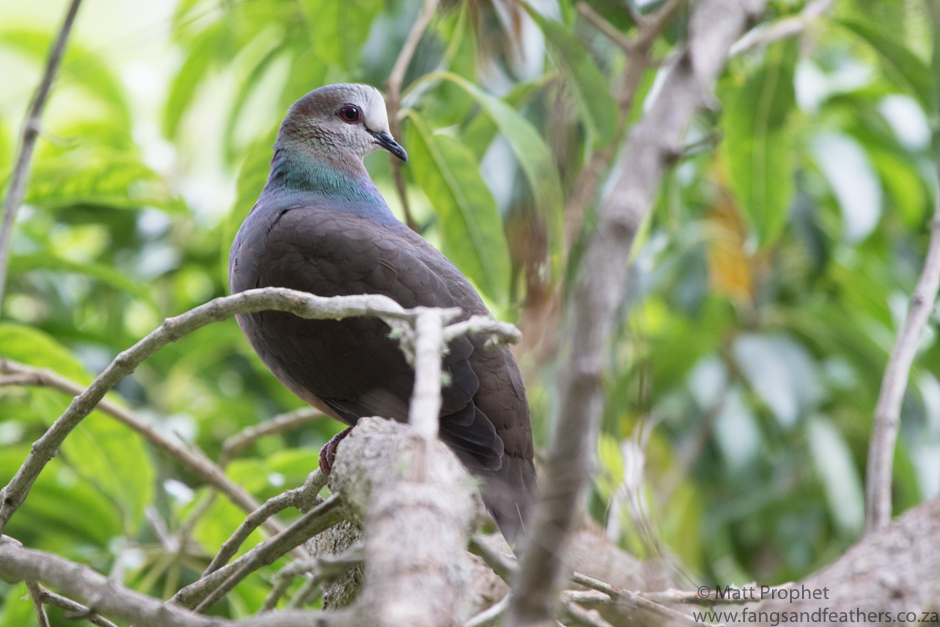 Lemon Dove can be a diificult species to see

Not only is Kirstenbosch a great place to admire native flowering species, but offers impressive views of the steep eastern slopes of Table Mountain and the Hottentots Holland Mountains to the east of it. It is usually protected from the prevailing south east wind which blows strongly in the Cape during the summer months. If one is limited to only half a day of birding in while in Cape Town, then Kirstenbosch is a good bet. 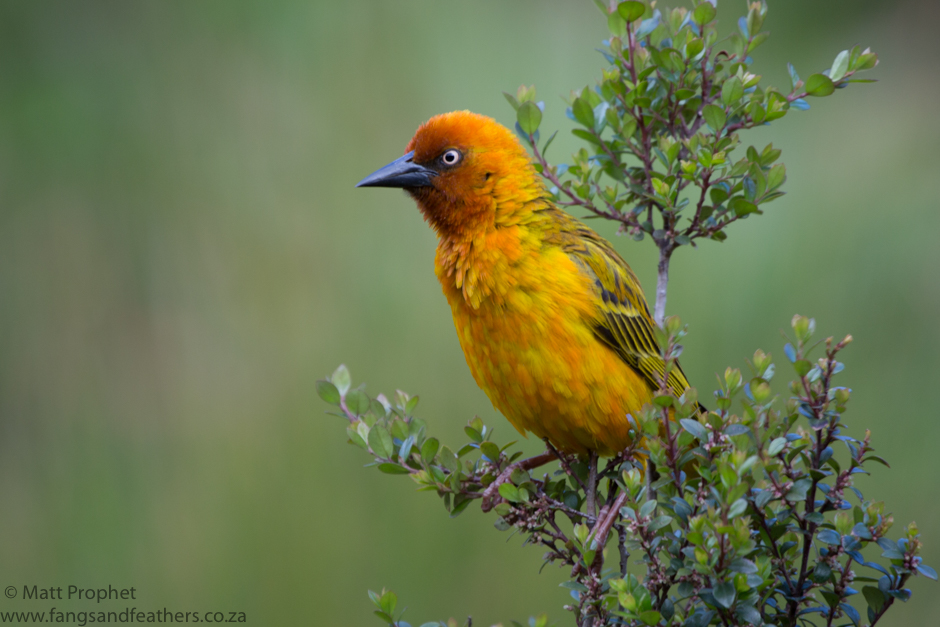 During the afternoon we visited the Cape Point section of Table Mountain National Park on the southern end of the Cape Peninsula. Most birders touring with us want to visit this iconic land mark, where the Indian and Atlantic Oceans are said to meet. The target bird while birding at Cape Point is usually the endemic Cape Sisken, which we regulary see here. The views from the Point looking over False Bay and back up the Cape Peninsula are really stunning and well worth taking in. Pelagic seabirds such as Cape Gannet, Sooty Shearwater and White-chinned Petrel are regular through the binoculars from the viewing turrets. 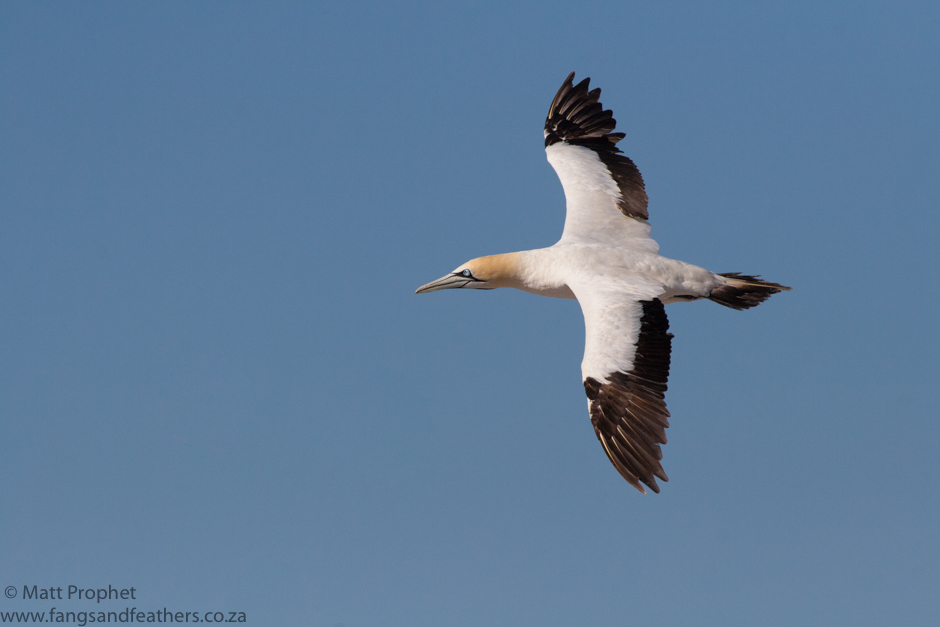 While having lunch we observed a large pod of distant dolphins, which looked like common dolphins in the False Bay. Although more than a kilometre away from where we sat, their splashing and wake which they created was very visible. They then swam closer to our position and we where able to make out more detail on them. After lunch, while walking up to the Cape Point lighthouse situated 238m above sea level we searched for Cape Sisken. Only flight views where obtained on this day, but we did enjoy good views of a few Cape Eland which where of particular interest to our clients. These very large spiral-horned antelope are the second largest in Africa, after the Giant Eland (occuring in parts of central Africa) and adult males can weigh around 800kg! 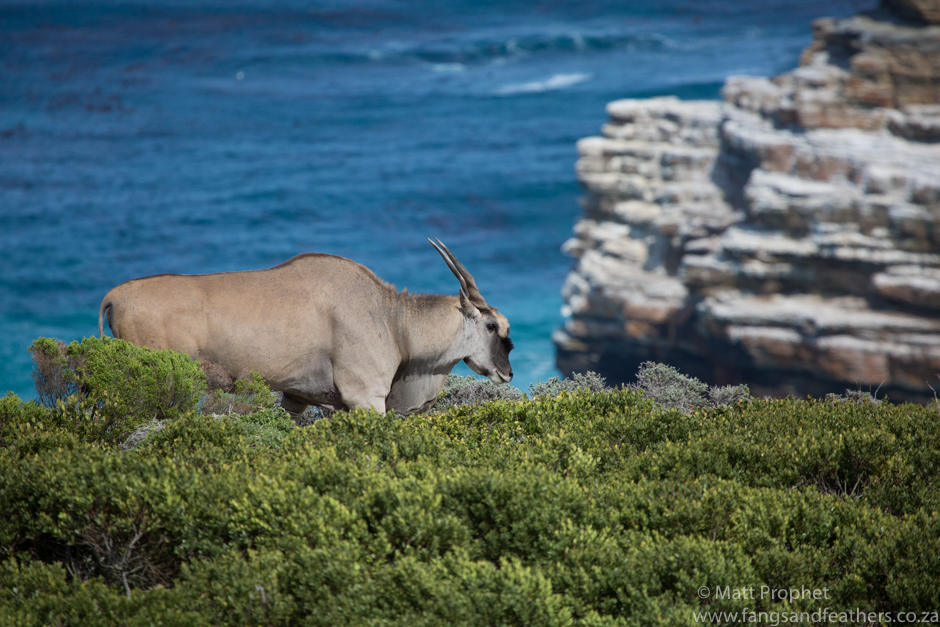 Chacma Baboon where seen alongside the road on route to the popular African Penguin Colony at Boulders Beach in Simonstown. Only two mainland colonies occur, the other being at Stony Point in Betty's bay, another popular birding location on the eastern side of False Bay. Most of our guests look forward to seeing African Penguin since most other penguin species live in inaccesible locations in the southern oceans . Lots of photographs where taken of the charasmatic birds going about their general business in the colony with the afternoon light behind us. We spent about 45 minutes at the colony and once everyone was satisfied with their views and photographs we travelled back to the guesthouse. 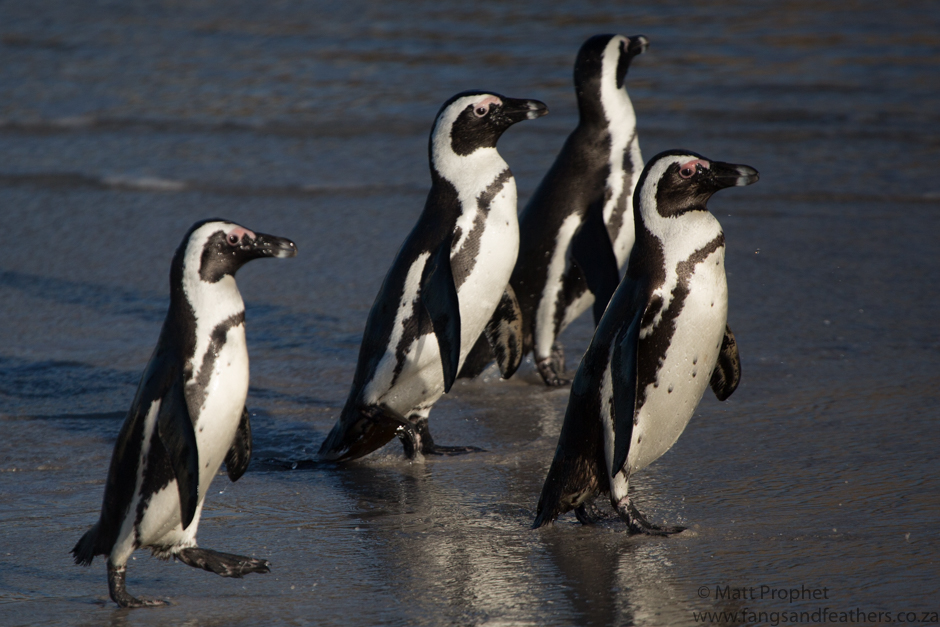 Day two involved birding some fresh water pans immediately north of Cape Town on its west coast. All of the sites visted where still within the confines of what we consider to be greater Cape Town and our first stop at Milnerton Lagoon, situated 10km north of Cape Town city produced, African Pied Kingfisher, African Darter, Reed Cormorant, Hartlaub's, Grey-headed and Kelp Gull, Greater Flamingo, Yellow-billed Duck, Speckeled Pigeon, Cape Wagtail and African Spoonbill. All common species, but all interesting to the visiting birder. 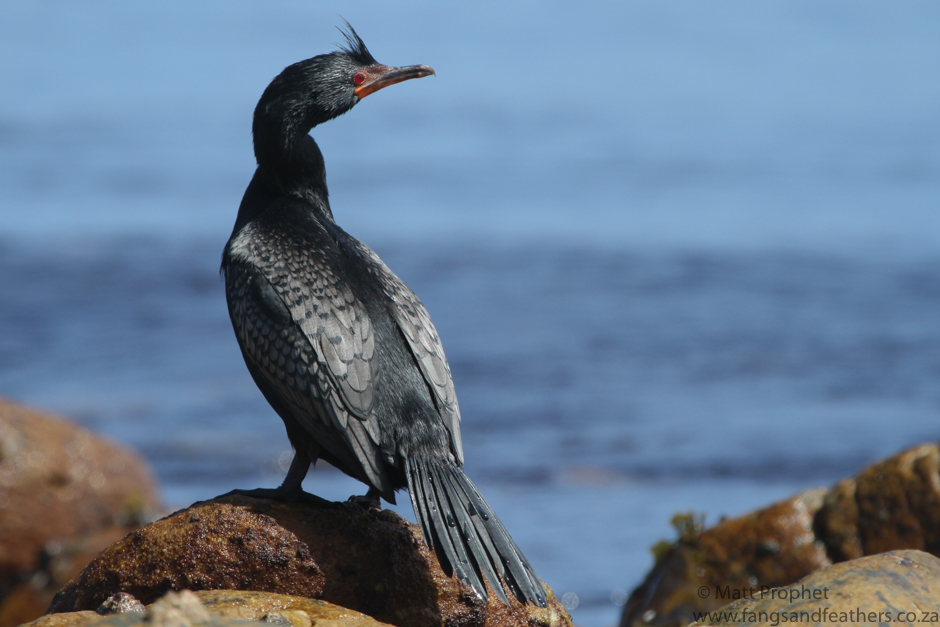 The endangered Crowned Cormorant is often seen on our day tours

A little further up the coastline, the pans at Dolphin Beach Resort produced some good birds like Hottentot Teal, African Snipe and Wood Sandpiper and a stop at Kreefte Baai, a few kilometres to the south of Melkbosstrand delivered Karoo Scrub Robin, White-fronted Sandplover and African Oystercatcher. 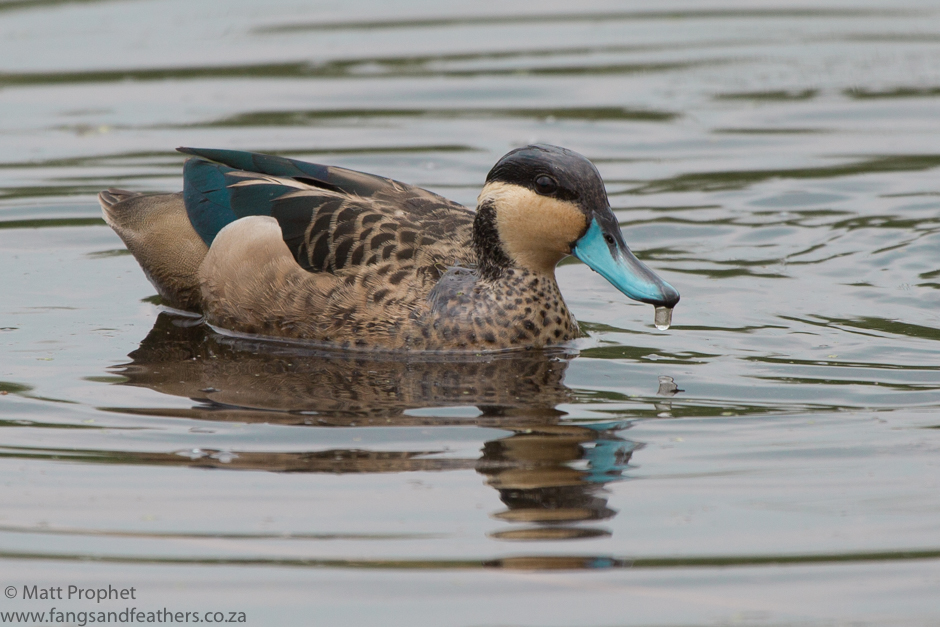 Intaka Island located 12km outside of Cape Town is an impressive wetland where the native vegetation has been restored. This largely man-made bird haven is reliable for the three kingfishers species which reside in Cape Town and also contains good bird hides from which to view or photograph them. We managed excellent views of Giant, African Pied and Malachite Kingfishers and watched an African Swamphen collecting nesting material, only metres away from us. 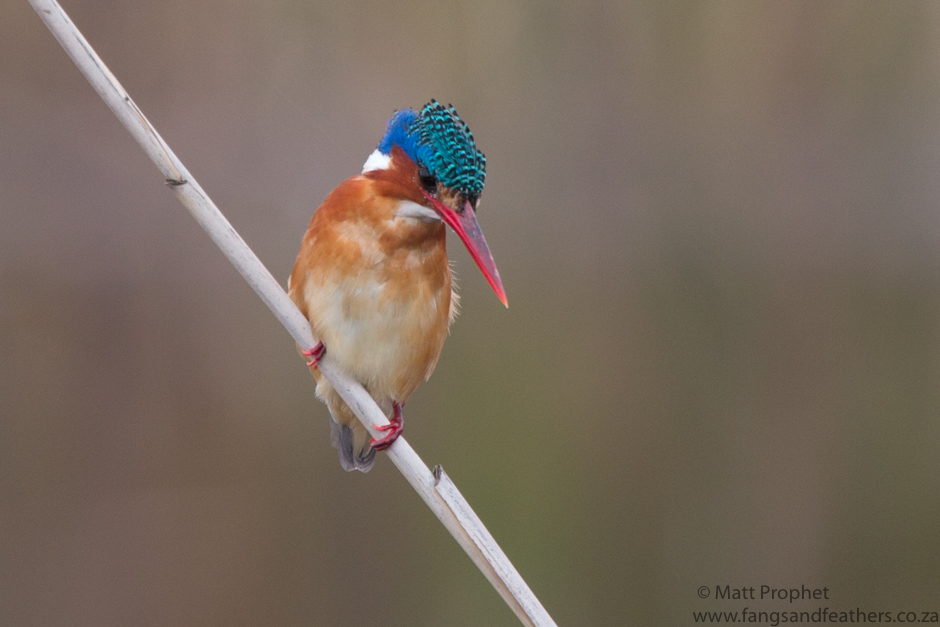 After a light lunch at a nearby eatery we headed for Strandfontein Birding Area (Sewage Works) on the Cape Flats which offers the visiting birder with some very impressive birding. One of the unexpected suprises for the first time visitors to Cape Town are the large numbers of Greater Flamingoes which can be seen here. Most of our guests remark on how impressive these sightings are, they are not wrong, since a flock of 200 flamingoes is impressive to say the least.  Other birds on the day included approximately 100 Great White Pelicans and Cape, Red-billed and more Hottentot Teal! Excellent views of male and female Maccoa Ducks where obtained, as well as Red-billed and Cape Teal and Southern Pochard. Water and Spotted Thick-knees (Dikkop) were both seen, along with a striking male Cape Longclaw. Brown-throated Martin, White-throated, Barn Swallow and White Storks where ticked off along with a number of other common passerines. 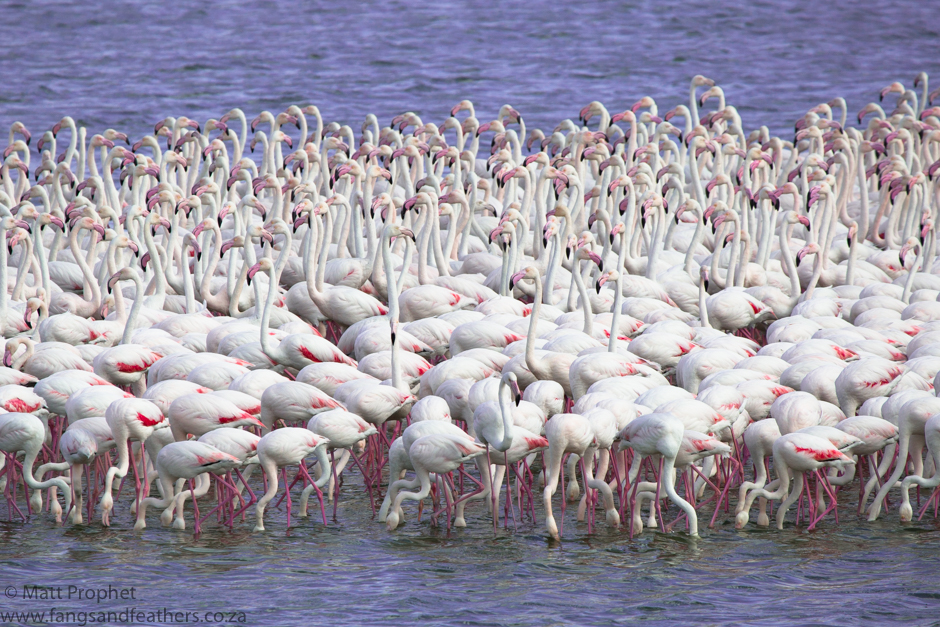 Mammals encountered here on a regular basis include the endemic Cape Grysbok, a small browsing antelope of the fynbos biome along with Water and Cape Grey Mongoose. After an exciting day we headed back to the guesthouse situated near Cape Town. Everyone had enjoyed their time and shared many good sightings over the two day tour.  A number of our clients expressed that South Africa warranted a second trip, after being so impressed with the general diversity.

If you are visiting Cape Town and want to go birding please send us an email. We cater for begginer and experienced birders and well as bird photographers.