At the end of January 2018 we embraked on an exciting catch and release fishing / 4x4 tour on the central Namib Coastline which had been arranged with a group of friends. The focus of the trip was the exploration of the areas remarkable fishery and entailed travelling a 250km stretch of desert and wild Atlantic coastline to the remote desert outpost of Meob Bay. 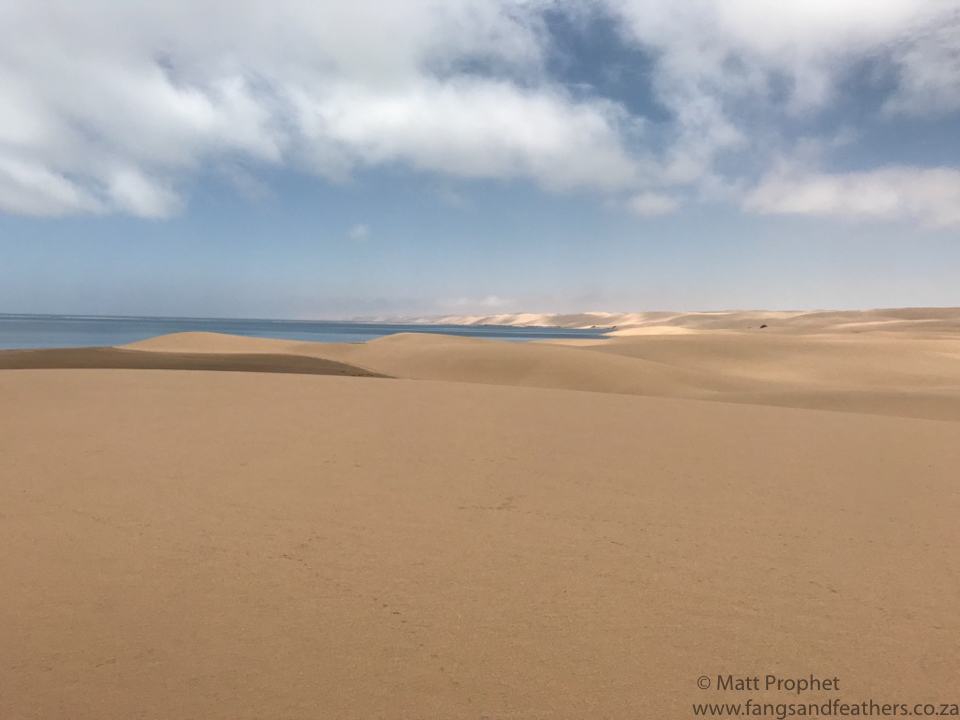 The drive to Meob Camp takes between four and six hours in a four wheel drive and the area is only accesible with special permits. Travelling south of Walvis Bay and past the isolated lagoon of Sandwich Harbour which is teaming with wading shorebirds, marine and terrestrial wildlife was an experience in itself. For those wanting to experience driving in sandy desolate conditions, this a great trip and it would be hard to find a more remote location anywhere in the world to drive to, no roads in or out.

Highlights included the breath-taking scenery with the Namib Desert's massive dunes slipping into the Atlantic. Brown Hyaena tracks where seen in the south-end of Sandwhich Harbour and thousands of migratory shorebirds fed on the exposed intertidal sandflats on the low tide. Once south of Sandwich Harbour the beach seems to carry on forever as one drives past scores of Black-backed Jackals and thousands of Cape Fur Seals of which there are numerous colonies on the beach dotted down the coastline. 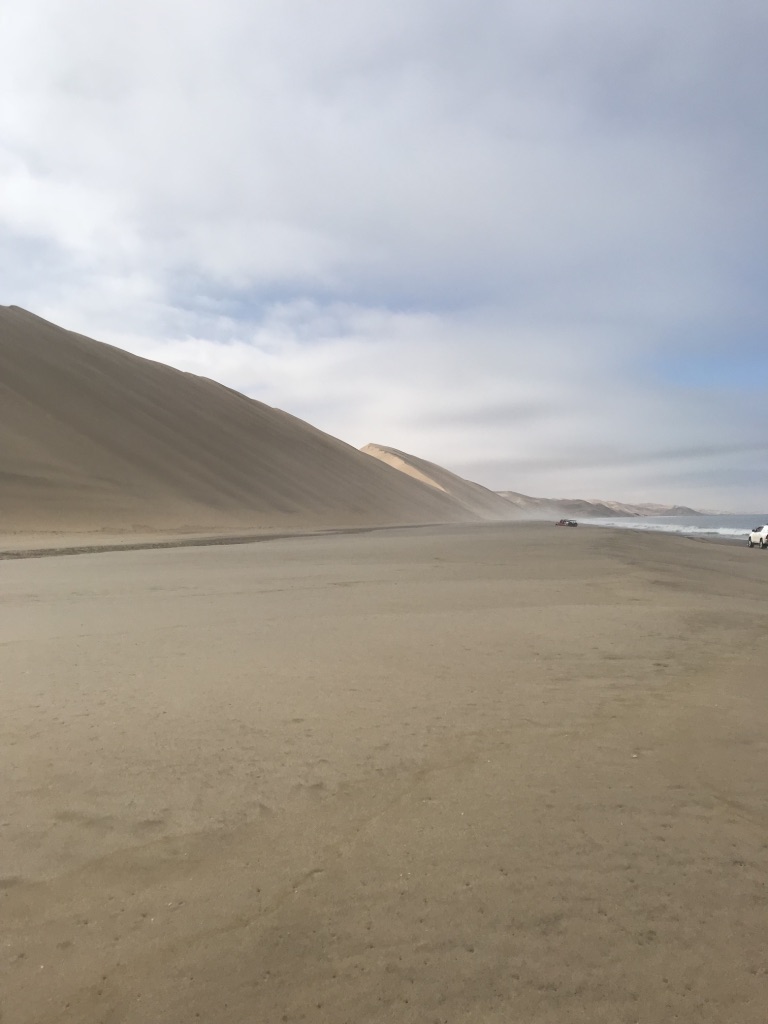 Where the Namib desert meets the Atlantic Ocean

We passed beautiful and remote places like Conception Bay, truly wild in the sense that people only travel though the area on the low tides, meaning that these parts of the Namib Desert are virtually unexplored in this day and age. To think that diamonds where discovered here in the early 1900's on the black rocky ridges which lie on the seaward side of the massive Namib dune field is difficult to comprehend.

Meob Bay itself was once a whaling station and the beach is littered with the bones of the hump-backed whales which where slaughtered here a very long time ago. The place has a ghostly atmosphere and two old whaling boats still stand on rollers on the gravel plains above the high tide mark. 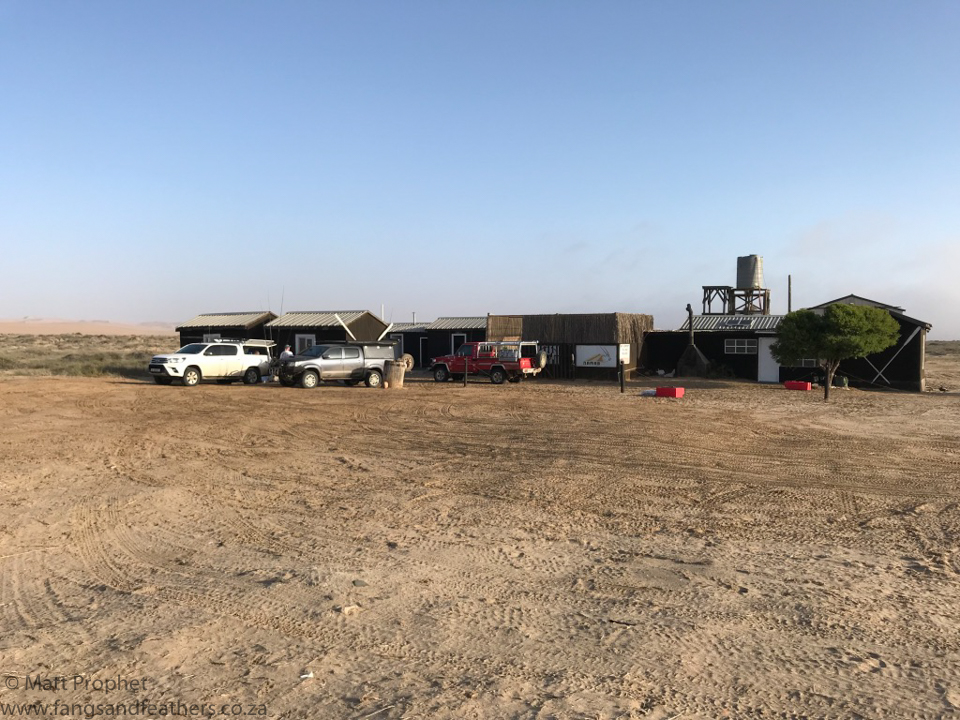 Meob Bay Camp, our base for six nights, in the wilds

This area is also the home of the endangered Damara Tern which nests on the exposed gravel pans a few hundred metres inland of the beach. Flocks of up to 28 Damara Terns where seen at one time, which was one of the wildlife highlights of the trip for me.

Meob Bay Camp which lies about 20km south of Meob Bay itself is within a multile use zone and is where we spent six nights. We experienced some amazing angling and caught Kob and West Coast Steenbras in numbers which where incredible by todays standards. Only circle hooks where used and most of the fish that where caught where released, with the exception of fish which where kept for the camp-use which is compliant with the government regulations for visitors to the area.

A heard of Gemsbok (Oryx) frequented the area in the hummock dunes near Meob Bay Camp. What is facinating about these Gemsbok is that they hardly ever drink, since there is no surface water. The coastal mists which blanket this coastline are the life giver in this desert. The jackals are the apex predator here and their are occasional sightings of Brown Hyaena which are said to be more abundant to the south, closer to Luderitz. 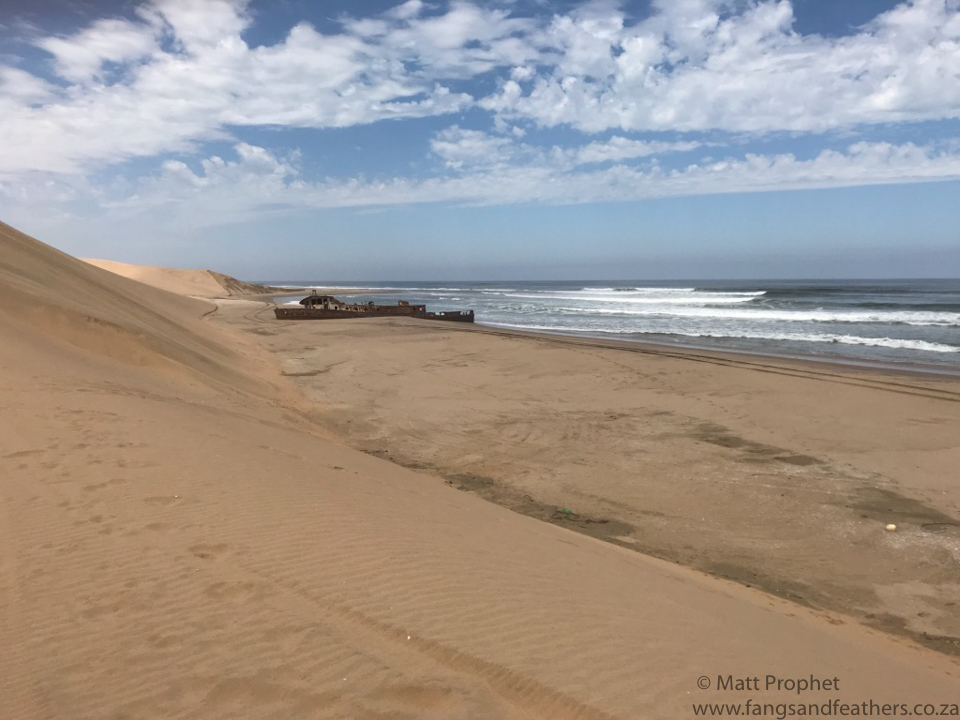 Wreck of the Shawnee

The met my expectations and although our itinerary was angling focused the opportunity to explore the beaches and terrestrial environment from Meob Bay seemed better than just about anywhere else. With Sossusvlei 52km to the east north east, Walvis Bay and Luderitz hundreds of kilometeres to the north and south, one is truly isolated when one is here.